We are delighted to announce that we have won an award at the prestigious BOOM (Best of Organic Market) awards at a glittering ceremony held at Borough Market Hall in London. The BOOM awards celebrate the best innovative and great tasting organic products and our Vanilla Porter has been selected the winner of the Alcohol Beverages: Beer category. 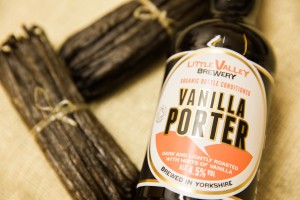 d writers and specialists, alongside celebrity foodies and consumer judges.

As many of you already know, our Vanilla Porter has an ABV of 4.5% and is a rich and lightly roasted dark coloured ale with subtle hints of vanilla and liquorice; using real vanilla pods and ground vanilla.

“To be celebrated and recognised as a winner at the BOOM awards is a huge achievement for Little Valley Brewery, we couldn’t be happier! Winning this specialist award is a huge success and further supports the continued hard work and investment which we put into brewing our beers. We use traditional techniques to create original beers and pride ourselves on our organic beer selection which includes the Vanilla Porter.”

Previously known as the Organic Food Awards, the awards have been showcasing the best in organic for almost 30 years. This year, the awards included categories for everything from cheese and dairy to cafés, restaurants and street food. Competition for the 2016 BOOMs was really tough – with almost 500 entries across all categories.

Anna Jones, former chef and food stylist for Jamie Oliver, is this year’s BOOM Ambassador. Speaking about the awards she said:

“I believe that food and drink should be joyful, and good organic produce is at the centre of this joy. There has been a real shift towards people wanting to know the origins of what they’re eating and drinking – from where it was grown to who planted the seeds – and organic produce has these values at its core. I am excited to celebrate the individuals and businesses that are giving us some brilliant choices about what we buy, eat and drink.”

Did you know? Our top five obscure facts about beer

Five beer hacks to help you through Dry January

Show us your finish line face!