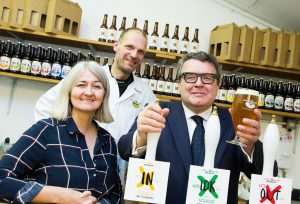 On Friday 4th June we played host to a very exciting visitor… the Deputy Leader of the Labour Party, Tom Watson, as part of his campaign tour ahead of the EU referendum on 23rd June. The visit comes following the launch of our trio of EU referendum beers, to encourage the nation to engage with the debate.

Joined by Jane Scullion Labour’s candidate for Luddendenfoot and Chris Tarlo retired MP for the Calder Valley, Watson took a tour of our brewery and spoke with Wim and I about the upcoming EU Referendum, culminating in him pulling a pint of Vote IN at the brewery shop. The IN beer is one of three that we have brewed: IN, OUT and IDK (I Don’t Know), in order to spark debate amongst Britain’s beer drinkers and encourage them to take their stance on June 23rd.

“The EU referendum is too important for people to ignore and we wanted to get the nation talking the best way we know how, with beer! Since launching the range in May we’ve had a great response, seeing a huge demand from new and existing customers, with the beers selling well in shops, pubs and bars not only in Yorkshire but across the UK

“We were delighted to welcome Mr. Watson to our brewery and it’s great to see that these beers are doing exactly what we intended them to. I will be voting to ‘Remain’ on the 23rd June, but this campaign is all about urging the nation to make use of their vote when the time comes.”

“This is by far and away the best visit I have done during the referendum campaign. A West Yorkshire brewery on a Friday afternoon, which was a joy to be at. The Vote IN beer is an exceptional brew and must be drunk by as many people as possible!”

Say hello to our Cherry Saison!