New look and the Python IPA 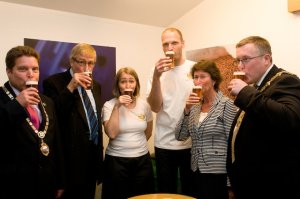 Little Valley celebrated its New Look and the launch of its eighth bottle conditioned ale – the ‘Python IPA’ – on Friday 22nd July.

Deputy Mayor and Mayoress of Calderdale and Mayor of Hebden Royd were at the brewery to open the event which was attended by over 100 representatives from the brewing industry including local businesses.  Council dignitaries spoke of how Little Valley had done wonders for Calderdale in attracting people to the area – with most of its beers named after local places and landmarks:  Withens Pale Ale, Cragg Vale Bitter, Tod’s Blonde, Hebden’s Wheat, Stoodley Stout and Moor Ale.

The Python IPA is to feature on Mr Protz blog as his ‘Beer of the Month’ for August.  www.beer-pages.com/blog.html

Wim van der Spek and Sue Cooper owners at Little Valley expressed their thanks to ‘Design Futures’ of Sheffield for their work in developing the new look.  Thanks were also given to everyone in attendance for their support of the brewery over the last six years.

The north-west supermarket, Booths, will be showcasing the Python IPA in 19 of its 26 stores during the month of September.

Contact the brewery for more information on where to find the Python!

Show us your finish line face!

Santé! Celebrate the start of the Tour de France by matching your favourite beers to classic French foods