Why beer is the ultimate post-cycling refreshment 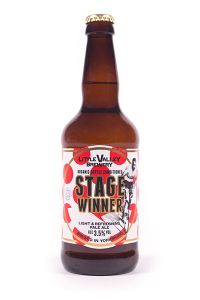 With Yorkshire being home to thousands of keen cyclists and some of the most popular cycling routes, we’ve outlined three reasons why you should reach for a beer when you get off the saddle:

While it may seem mad to suggest drinking a beer rather than water after a long cycle, research shows that a couple of bottles of beer can be just as hydrating as water…and it tastes better.

As the pros will know, groups of cyclists will often meet at a pub before and after the ride. Really, it would be rude not to call into said pub for a pint or two to catch up with everyone.

Care for those muscles

Flexing and stretching in all the right ways is vital after any sort of exercise, especially after a lengthy bike ride. Beer can help to relax tired muscles, which when combined with the right cool down exercises will leave you feeling relaxed and injury free.

As keen cyclists ourselves, we’re incredibly proud of the legacy that Le Tour has left in our region. Having launched our Stage Winner in 2014 dedicated to Brian Robinson, the first Briton to win a stage of Le Tour de France, we want to continue encouraging cyclists of Yorkshire to consider beer as their go to post-cycle drink. Our brewery sits just off the longest continuous gradient in the country, so if anyone needs to stop for a refreshment along the way, we always welcome them into the brewery shop to buy a bottle or two to enjoy at the end of their ride – or during!

Find out more about Little Valley by following us on Twitter here: twitter.com/LittleValleyAle.

The best beers to enjoy with your Easter eggs this weekend