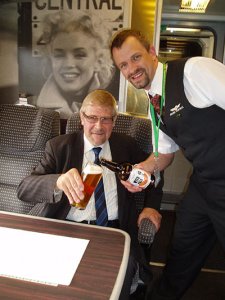 Roger Protz is one of the world’s leading beer writers and tasters, with 17 books to his name and a regular contributor to the Guardian, Independent and ‘What’s Brewing’. He has also been the editor of the annual CAMRA Good Beer Guide for over 20 years.

There isn’t much he doesn’t know about the subject and Roger travels widely in search of good beer. Travelling on Thursday 21 July, he didn’t have too far to go find two excellent beers on the 16.48hrs Grand Central service from London Kings Cross to Yorkshire.

Members of the onboard crew invited Mr Protz to sample a glass of Withens Pale Ale.

The Withens Pale Ale was introduced to the high speed train services a year ago, to coincide with the launch of train services linking West Yorkshire with London.

“From the outset we wanted to offer our passengers some really great tastes of Yorkshire. To get an endorsement from a world expert in beers that we are stocking some of the very best is testament indeed for all our efforts. Being a northern-based railway operator, we like to source from local suppliers wherever we can. We could have chosen one of the major beer brands and worked with national wholesalers but instead chose to team up directly with a local, independent brewery to reference our connection with Halifax.”

Santé! Celebrate the start of the Tour de France by matching your favourite beers to classic French foods